“I am simply a student who spent four disappointing years at the University of Illinois,” Paul Schroeder, the student speaker for Illinois’ Centennial Convocation in 1968, explained in one of various surprising moments in his address. It was both an expression of frustration in a lack of student-centered course designs and, in his estimation, an admission of his status as an ordinary Illinois student. However, Paul’s story after graduation would prove quite unique. Forecasting a lifelong dedication to activism that would range from environmental activism to prison and hospital reform, Paul affirmed that a university education should cultivate public engagement: “I am not looking so much for a job as for some guidance in solving for myself the critical questions of my duty to my society and to myself.”

Paul’s speech encapsulated student sentiments on the value of the university at a tumultuous time. Tensions surrounding the Vietnam War and race relations were teeming both on campus and across the nation. President David Dodds Henry acknowledged these anxieties in his own address. He positioned them as forces moving forward that would come to shape the land grant ideal – to make a college education attainable for the broader populace, not just the elite, and, as Paul underscores, to instill a commitment to public service and social advancement. Despite distinct differences in the tones of their addresses, land grant aims are central to both speakers. “This is a people’s university, and it must fit the needs of Illinois and the nation,” Paul avowed. 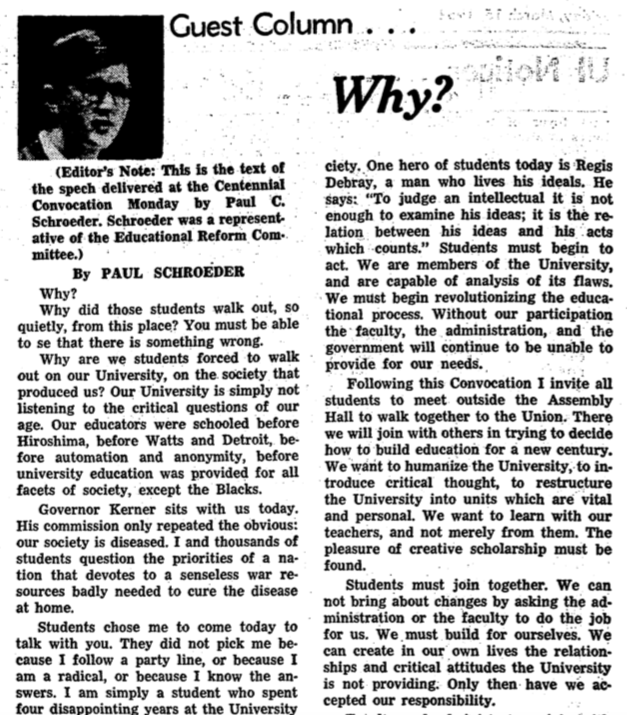 An image of Paul Schroeder’s speech as published in The Daily Illini on March 15, 1968. Read the speech in its entirety here.

With the Morrill Act enacted over 150 years ago and various land grant institutions celebrating sesquicentennials, there is now significant reflection on the land grant mission in the current climate. Similar to the lead-up to its centennial, Illinois has hosted speakers and symposia around issues of interdisciplinary research it finds central to its legacy. Purdue President Mitch Daniels, in turn, sets Purdue’s headline-grabbing acquisition of Kaplan University precisely within Purdue’s land grant beginnings. Yet attention toward the interdisciplinary projects and centers whose work coalesced around the Centennial moment at our campuses is lacking. Since that time, largely unheralded technological innovations at land grant institutions have been seminal toward ensuring the Morrill Act’s vision for accessible education.

Our research within the Humanities Without Walls Innovation in the Global Midwest research cluster focuses on such innovations. Our Mellon-funded research collaboration brings together scholars from UIUC, Purdue University, and the University of Minnesota. Through archival research, oral history collection, and student-centered course design, we highlight the Midwest as a key early site of experimentation in online environments and accessibility through cross-pollinating projects.

In this post, I present several case studies from Illinois accordingly. I do so to explicate how such innovations are student-centered, grassroots, and highly social – dimensions that are central to recognize in imagining or reimagining futures in higher education. It is these very characteristics within these innovations that inspire students long after graduation.

Innovation at Illinois: PLATO, the BCL, and DRES

PLATO (Programmed Logic for Automatic Teaching Operations) was a pioneering computer-based education system. A tribute to President Henry listed PLATO among Illinois’ greatest accomplishments under his stewardship and deemed it “the most advanced in the Nation in the use of computers for instructional purposes.” Launched in 1960, PLATO, by the end of the decade, would boast 720 hours of instructional material, with most of its 700 terminals spread across the world.

PLATO was clearly global in its effects, ranging from technical innovations as an early (if not the first) online social network to its development of plasma display panels. But it also had lesser-known local uses. Students of the BCL (Biological Computer Laboratory) at Illinois were part of a network of graduate students behind an experimental PLATO lesson on Boneyard Creek, dogged by corporate pollution and sheetpiled banks from human activity. According to Brian Dear, this may add to PLATO’s accolades as possibly the first online space for citizen participation around an environmental issue – an obvious extension of the land grant mission. The BCL also used PLATO for early self-organization visualizations and mentored undergraduate students imagining PLATO applications toward educating students with physical disabilities. 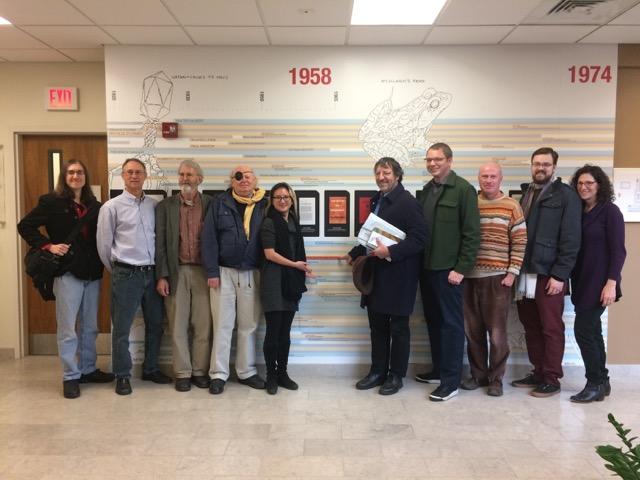 A group photo featuring members of our research team and some of the BCL alum in attendance at our BCL Reunion in December 2016. Those pictured, from left to right, include: Ned Prutzer; Robert Baird, Associate Director of Instructional Spaces of Technology at UIUC’s Center for Innovation in Teaching and Learning; Paul Schroeder; John Day, lecturer at Boston University Metropolitan College and fellow student of Heinz von Foerster; Anita Say Chan, Associate Professor in Media and Cinema Studies at UIUC; Tom Misa, former director of the Charles Babbage Institute at the University of Minnesota; Kevin Hamilton, Professor and Senior Associate Dean at UIUC’s College of Fine and Applied Arts; Mike Twidale, Professor at the UIUC iSchool; Stephen Horrocks, PhD Candidate in American Studies at Purdue University; and Alaina Kanfer, Director of External Relationships and Strategic Partnerships at the Carl R. Woese Institute of Genomic Biology at UIUC.

Led by Heinz von Foerster, a key figure in the Macy conferences on cybernetics, the BCL was a leading second order cybernetics center from 1958 to the mid 1970s. As our Scalar book on the BCL details, it was a highly active and interdisciplinary social network synonymous not only with a series of technological experiments in biological computing and bionics, but also local activism around the Vietnam war and education reform. It was von Foerster, in fact, who demanded there be a student speaker to represent these concerns as part of the convocation. Paul Schroeder, the student eventually selected, was already familiar with the BCL and von Foerster, with whom he maintained a close relationship until von Foerster’s passing. 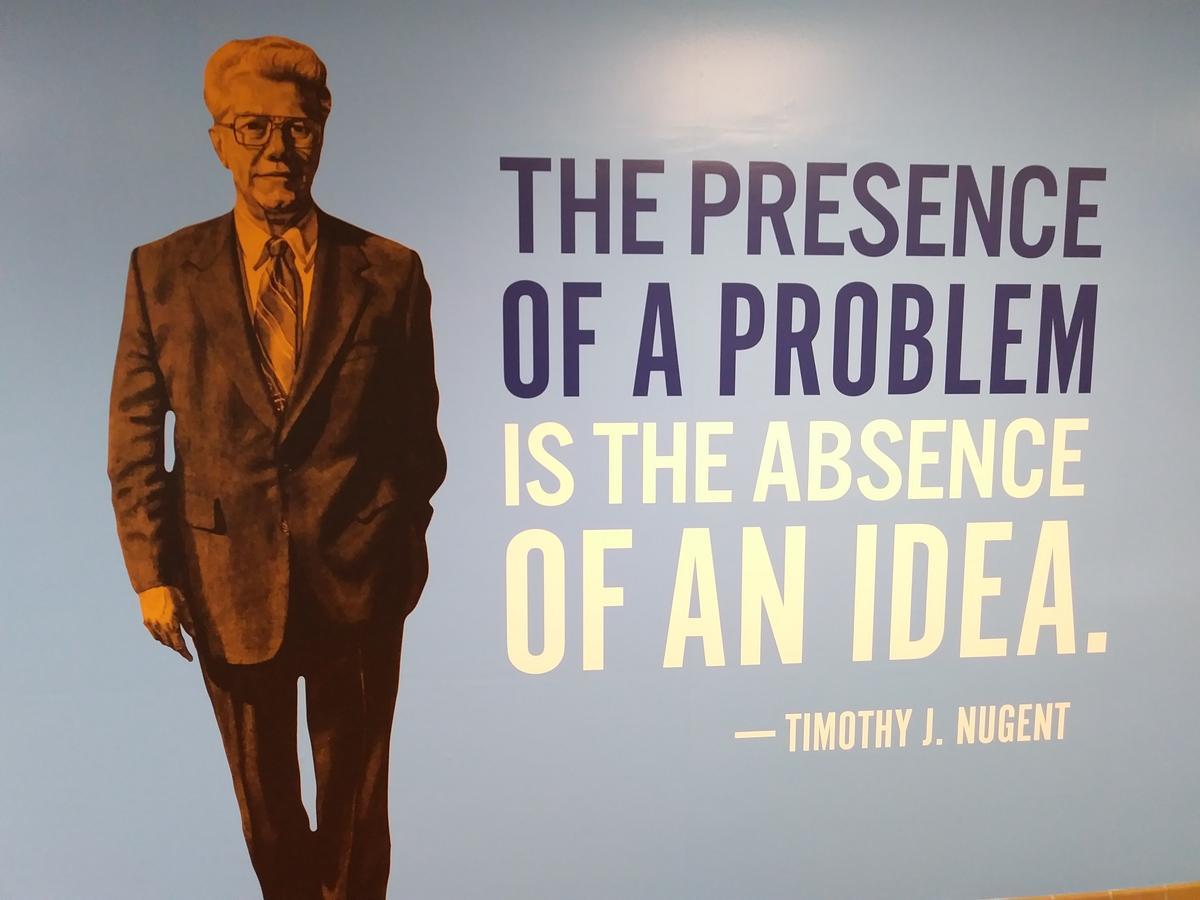 Tim Nugent, as pictured in a mural found in the DRES building.

Like the BCL, DRES (the Division of Disability Resources and Educational Services) was largely student-led. A service-oriented fraternity (Delta Sigma Omicron – the first for students with physical disabilities) championed a great deal of its projects and fundraising. Beginning in 1948, DRES made Illinois the first campus with ramps, curb cuts, and buses with lifts. It also made Illinois the first higher education institution with collegiate athletics, transitional living, and study abroad programs for individuals with physical disabilities. Beyond this local work, DRES research shaped national building accessibility standards and spread wheelchair innovations in both wheelchair equipment and technique worldwide through athletic exhibitions.

These innovations underscore how innovation is always situated – highly local and used in particular (rather than universal) ways. Each flourished within undergraduate-centered lab spaces which sustained the social networks necessary to ensure continued success. The lab as a student-centered product thus has a notably different output. Students apply the model elsewhere as they move forward in their careers through community and outreach projects not easily metricized as an output of the university, yet essential to the land grant tradition. Job placements, commercialization, grants, or patents are the metrics most often used.

Our work in oral history collection related to these case studies highlights the alumni networks associated with these innovations instead. BCL students, several of whom worked with PLATO, would go on to become professors, founders of technology companies, and community activists like Paul Schroeder – all the while crediting von Foerster and the BCL for teaching them how to approach and think about the concerns that would define their careers. In turn, DRES alum like eight-time Boston Marathon winner Jean Driscoll and fellow athlete Ann Cody extend the program’s legacy through governmental leadership programs for global accessibility initiatives.

Likewise, our pedagogical work in this project is interested in student-centered training in digital production focused on these case studies. This not only ensures that the effects of land grant innovations are narrated more fully, but also reinvigorated through current student perspectives. Student projects in our pilot seminars range from highlighting current DRES research and situating contemporary research in complexity within the BCL’s legacy to historicizing student-led sustainability efforts through these case studies. These projects take up the mantle of DH not just in its call to develop public scholarly archives highlighting lesser-known technological narratives, but in its invitation to rethink the output of the university and its innovations as a means of engaging with the import and future of higher education.

Colleges & Universities, Future of Education, Schools
This site is part of the HASTAC network on Humanities Commons. Explore other sites on this network or register to build your own.
Terms of ServicePrivacy PolicyGuidelines for Participation